This image and its ilk bothers me to no end. This is a profile of the 9th stage of the Tour de France*.

So I had this simple little post in mind about the Tour de France and biking and elevation and distance and it would wrap up neatly into a little Pythagorean Theorem lesson. I start looking around for nice little diagrams much like this one, showing the distance and elevation. The idea was going to be simply, “find the absolute distance the bikers travel in this particular stage.”

But it turns out these diagrams are a sham. An absolute sham. You see, the x-axis already does represent the absolute distance. Take this stage, for example. Above is the “cross section” of the stage. And here’s the actual route.

Note the exact same distance peddled. So x-axis is in actual distance peddled, not simply the horizontal distance traveled, as any proper diagramer should do. I suppose it’s more helpful for the bikers to know the absolute distance they have to travel, but it’s …. it’s….. it’s… just wrong. In retrospect, I did sort of think these slopes seemed a tad steep….

So we have a new task.

Display these pictures side-by-side and give a candy to whoever can tell you what’s wrong with the cross section picture. 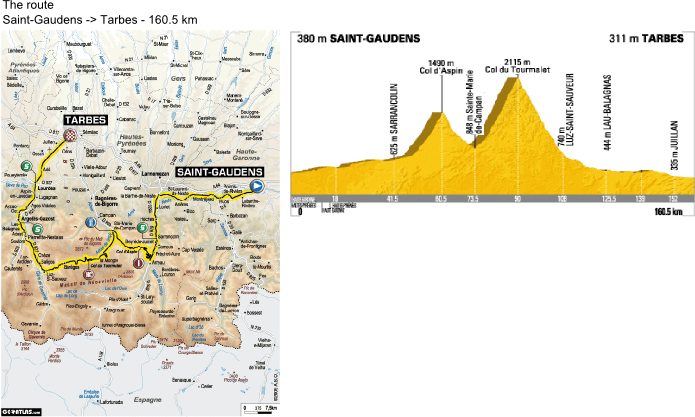 Once the bright little rays of sunshine figure out that the x-axis is not representative of the horizontal distance, let them know that they are going to be the ones to fix the x-axis and generate a whole new, better, correct set of Tour de France cross sections.

First, let’s break the stage up into a bunch of right triangles, labeling the distances as we go. 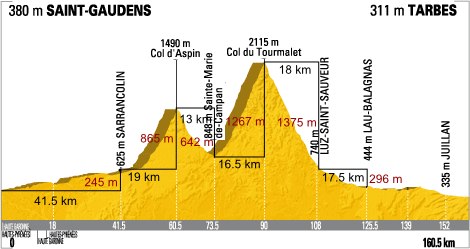 The thing to watch out for is the distances in black are actually the diagonal of the right triangle, or the distance peddled. For instance, if we look at the first stretch here,

in a “proper diagram”, it would look like this:

Watching out for the units, and applying Pythagorean’s Theorem, we find the horizontal distance.

OK so that won’t change the diagram a whole lot. I guess when the horizontal distance is thousands of times longer than the elevation gain, that won’t make much of a difference, will it?

Let’s try one of the steeper sections.

This should actually be the following. 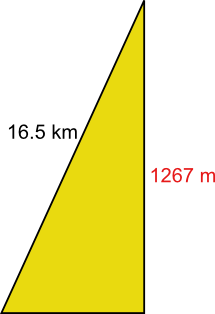 Again not a huge difference, but a difference nonetheless.

Here are a couple other stages of the Tour de France that could stand to be “corrected” by your class.

Here are a couple more stage profiles of the Tour de France for your perusal.

* – the original post contained the typo “Your de France”, which is probably a good tagline for a Tour de France fan-club, but was not the intention of the piece.

4 thoughts on “Pythagoras and the Pyrenees ; Performance Enhancing Math”