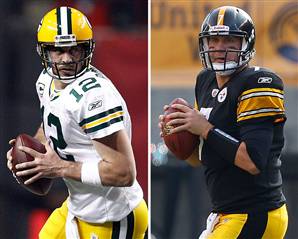 ESPN.com columnist Bill Simmons and fellow sports gambling addict Cousin Sal had their annual Super Bowl prop bets podcast where they discussed the best gambling deals of this Sunday’s Super Bowl (if gambling were legal, *ahem*). Aside: if you haven’t checked out the list of potential bets for the Super Bowl, you should (how long will Christina Aguilera hold the word “brave” in the National Anthem? over/under is at 6 seconds).

Anyway, one of Simmons’ prime suggestions was the bet of 100/1 for the number of total points scored being in the 71-75 range and 150/1 in the 76-80 range. So you plunk 10 bucks on each of those and a $20 bet could net you $1000 or more in the event it’s a high scoring game. The logic Simmons mentioned was this: “if these teams played 100 games, they would score over 70 points at least once.” That totally makes sense to me. In fact, the two teams playing in the Super Bowl, Green Bay and Pittsburgh, played in 2009 and scored a total of 83 points (which, strangely enough is too much for the bets he suggested). But if you wanted insurance against that you could put another $10 down on the higher point total range, but it’s starting to add up.

Again, this makes total sense to me. It seems like every other week in the NFL there’s some wacky game that sees both teams score over 35 points. Why, it happened just a couple weeks ago. And while it’s not likely to happen, it sometimes does, and at 100/1 odds that’s some pretty good winnings.

But is it good math?

There’s a few ways we could approach this mathematically. If we buy into both point ranges to cover 71-80, the mean payout is 1/125, meaning we bet one dollar and get 125 back. Now, let’s look at all the scores of every NFL game this past season.

We find that only 10 regular season games and the 1 aforementioned playoff game featured a score above 70 points. Of those games, one exceeded 80 points.

There are 32 teams in the NFL and each team plays 16 games.

There have been 10 postseason games thus far.

So could we expect 1 out of every 100 games between these teams to end up in the 71-80 range? It seems reasonable to me.

There’s one huge caveat though: the Super Bowl isn’t just a regular game. And I mean that in a bad way. Anyone that watches football can attest: Super Bowl teams look flat. No Super Bowl game has ever exceeded 70 total points. I don’t know if it’s the two-week layoff or the extra rust or whatever, but teams take a while to warm up. At least that’s the way it seems to me.

Take last year’s Super Bowl, for example: two of the most prolific offenses (and hapless defenses) only combined for 48 points – and that was artificially inflated by a defensive touchdown.

Still, with the high powered Green Bay offense and the “fast” turf of Cowboy Stadium, I’m not sure you’d drop all the way from almost a 2% chance of hitting to less than a 1% chance of hitting due solely to the Super Bowl “rust” that teams seem to suffer from.

What do you think? Is this a suckers bet? Is it too good to be true?