Larry Ellison, co-founder and CEO of Oracle, has gobs and gobs of money. How much money? Well enough that he can do this. 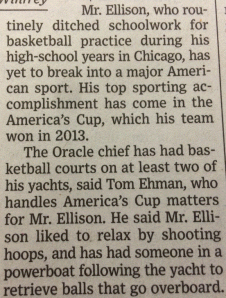 Boy that seems wasteful, doesn’t it. I mean, when I’m playing basketball on my yacht and I lose a ball into the ocean I just purchase an extra basketball. Wouldn’t it make more sense for Ellison to just buy a bunch of basketballs and grab a new one every time he loses one overboard? So my question is this: How many basketballs would Ellison have to lose in order to make the expense of basketball retrieval worthwhile?

View this document on Scribd

Here is some of the board work we generated during the initial Problem Defining and Know/Need-to-Know process.

It’s critical that we understand our ultimate goal here: we want practice developing a mathematical model based on a given scenario. A model should, among other things, simplify a complex situation. We wound up focusing on only two variables: the cost of the annual salary and the cost of a basketball. A couple variables that folks tossed out ended up not being explored mathematically. As you may have experienced, when given a modeling scenario, students might throw out potential variables to tack on in perpetuity. There comes a tipping point where the mathematical model ceases to simplify a complex scenario and only confuses it further. I find this pretty typical of “make a budget” tasks or other accounting-type tasks (“what about sunscreen costs? what about health insurance? what about the yacht food? etc etc etc.”). When you’re facilitating the brainstorming process, I’d suggest you restrict the number of variables you’re including to two or three. This way, the entire class is focusing on the same few variables, keeping the focus on the model development, not the number of ingredients you can toss into the stew.

6 thoughts on “Larry Ellison, billionaire CEO, makes unsound business decisions with regards to his basketball playing on his yacht.”