Math and the Message

My soon-to-be 6th Grade daughter is near trembling as she held her the schedule for the upcoming school year. She compares her paper with friends who were both part of her peer group as well has having the last name L through S. This is the day incoming 6th Grade students pick up their daily schedules from the gymnasium. She is at first dismayed that she isn’t in the same class as her friends. This is a bummer to kids, to be sure. But one that we all deal with and are able to handle. However, eventually it dawns on her that she was placed in a different math course from her peer group altogether: Math 6. Plain old, Math 6.

Last year, as a fifth grader, she received the message that she’d be placed in an accelerated math program. Students who were identified as Gifted and Talented were all part of the same cohort and participated in pull-out math throughout the year. There they received enrichment opportunities. She – and presumably her peers that were not part of these pull-out options – knew full well what this opportunity meant: she was one of the smart kids.

It’s in those gifted and talented pull-outs that she made her closest friends. Because why wouldn’t you? These were the well behaved kids. This was the fun class where kids get to play math games. These were the kids who were told that they were uniquely gifted and talented at mathematics.They were X-Men. They were invited to attend Hogwarts School of Wizardry. They all had that in common.

Most of those peers of hers were placed in a 7th Grade math course for the upcoming school year. They were deemed to be far enough along according to a few different metrics such that they could skip 6th grade math in order to take higher math earlier. There are three different metrics the school uses and kids have to excel in two of the three exams, including an “Algebra Readiness Test.” My daughter only excelled in one of the three exams, and not the “Algebra Readiness Test,” which, according to the school counselor, is the one that really matters. She was placed into 6th grade math, which makes sense: she’s a 6th Grader. But that’s not the message she’s receiving today.

Flashback Charles Dickens-style 6 years ago when my daughter brought home the following artifact from her Kindergarten class. 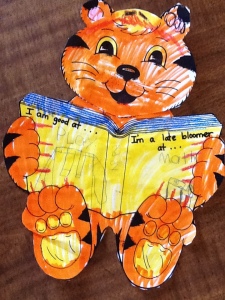 Regardless of where the message came from, the next six years were an attempt at combating the stereotype threat associated with being a young female mathematician. Roughly halfway through those six years, she took a test – the CogAT – in 2nd grade which ostensibly identifies Gifted and Talented individuals. She scored well enough to be identified as such in Math and English Language Arts. I was so proud of her, and that may have been a crucial mistake. My thinking at the time was that she had worked hard (she had!) and developed a sense of self-confidence (she had!) in math, as evidenced by the results of this test and teacher observations which placed her in this special cohort of special students.

Every night during dinner our little nuclear family of four have a conversation of questions. That is, one of us asks a question and then we go around the table and respond. This past Saturday, my question is “If you could go back in time to any year, what year would it be and why?” My wife says when she was 10 years old: that was the best age. My son says 1883 so he could warn everyone about the eruption of Krakatoa (what?). My daughter says she wishes she could go back in time to 5th grade and study for the “Algebra Readiness” test so she can be placed in the accelerated math class.

It’s probably worth noting that she didn’t have her Gifted and Talented identification revoked. I’m not even sure that’s possible or legal. Moreover, she is still on track to take Algebra in the 8th Grade, which – as we all know – places you on a track to take Calculus as a Senior in High School. Make no mistake: she’s still on a pathway of being in the “upper track” which feels gross to type on my computer screen. But she’s apparently not in the “upper upper track” which is deeply concerning to her; so much so that she brings it up at dinner as her point of time travel.

Let’s not let me off the hook here: I’d have been pleasantly pleased to have her be in a math class a year ahead, just as I was happy to see she was receiving special pull-out enrichment services in elementary school. I’m all too willing to take advantage of these opportunities from a place of privilege.  I’m not even in favor of the existence of such an accelerated math program, but I’d sure let her be in it given the chance.

This message is almost always unintentional. It is a bi-product of our dysfunctional understanding of the discipline of math that values correctness over effort, memorization over creativity, speed over thoughtfulness. It is also commonly used as tool with which we rank order and separate students. Sure, other subjects bi- and trisect the student body but none quite have the rusty edge that math does.

Math makes everyone feel stupid at some point. For many, it’s early on when you’re not fast enough during Math Minute. For others, it’s not until Algeb

ra. For others still, college Calculus is the first stomach punch. For many it’s all of the above. For my daughter, it was when she got that schedule and received the message that she was no longer one of the “smart kids.” Of course, the Original Sin was the message that there exist smart kids and not-quite-as-smart kids in math to begin with.

It took six years to communicate to my daughter that she was a brilliant mathematician. We do little Algebra exercises on the whiteboard. We worked through a Su

mmer curriculum to keep her brain finely tuned during the summer slog. Together, we once made an instructional video on an iPad to help a co-worker’s friend’s kid. And it took one piece of paper to undo that messaging. Of course, when a structure falls apart that quickly, that’s an indication it was built on a flimsy foundation. I wonder how long, if ever, she’ll re-receive the message once again that she is a brilliant mathematician. Or will we just have to wait for the next round of test results and keep our fingers crossed?

19 thoughts on “Math and the Message”