So my kids have this game called “Balance“. It’s basically like a Noah’s Ark version of Jenga, and it’s for ages three and up.

It’s generally a two-player game. The game play goes like this:

Player A: Place an animal on the boat.

Player B: Place an animal on the boat.

The game ends when one or more of the animals falls off the boat. The winner is the other player.

Pretty simple, right? It is. Except for this.

The instructions are about a page long (in four different languages) because it’s not a very complicated game. But then there’s this page at the end of the instructions, inside the back cover.

So apparently there’s some tournament version of the game that allows for 4 players. But I promise, as Galileo Galilei is my witness, there is no mention of a tournament style of gameplay in the instructions. There is no explanation of how to play tournament style or 4-player. Only this page, presumably showing a sample tournament. So here are my questions:

Here’s a close-in view of the sample tournament. 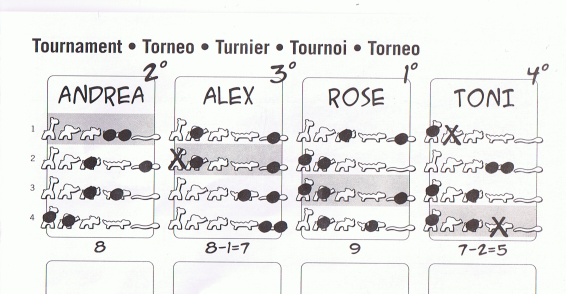 The game includes one boat and two of each of the following animals: giraffe, elephant, cow, alligator, and snake.

So, tell me the rules and scoring of Balance’s tournament play and what happened in this particular tournament. You have until the end of class.