The Struggle for Productive Struggle

This NPR radio spot confirms much of what we already know about struggle. There’s so much good stuff in this report, I’d encourage you to go listen to it or read it. Here are a couple nuggets I found particularly illuminating (emphasis mine).

For example, Stigler says, in the Japanese classrooms that he’s studied, teachers consciously design tasks that are slightly beyond the capabilities of the students they teach, so the students can actually experience struggling with something just outside their reach. Then, once the task is mastered, the teachers actively point out that the student was able to accomplish it through hard work and struggle.

“And I just think that especially in schools, we don’t create enough of those experiences, and then we don’t point them out clearly enough.”

“We did a study many years ago with first-grade students,” he tells me. “We decided to go out and give the students an impossible math problem to work on, and then we would measure how long they worked on it before they gave up.”

The American students “worked on it less than 30 seconds on average and then they basically looked at us and said, ‘We haven’t had this,’ ” he says.

“Think about that [kind of behavior] spread over a lifetime,” he says. “That’s a big difference.”

Great, teachers say, I know students learn from struggling through a complex problem, but my kids won’t do that. They won’t participate in productive struggle. They don’t come pre-loaded with productive struggle software. Therefore, the thinking goes, I need to address the kids where they’re at in terms of willing to struggle through a task.

Talk to any math teacher, and one of their frustrations will no doubt be that students give up too quickly on a complex problem. Mathematics is unique among all subject areas in its potential for cultivating a positive attitude toward struggle. It’s also the subject that tends to shut kids down for that very reason.

In other words, it’s a struggle to get kids willing to struggle.

And it’s one we need to struggle through.

Teachers, particularly math teachers, know that most learning occurs in the midst of struggle and overcoming struggle. But all students’ life they’ve been assessed and encouraged to solve rote problems quickly. How can we undo years of low-complexity problems? How might we develop students’ desire, ability, and disposition to struggle? What should students be doing? What should teachers be doing? What kind of tasks should kids be engaged with to encourage positive struggle behavior?

Even though dubbing this the “East” vs. “West” mindset is lazy terminology, it does conjure up a sort of spectrum of student and teacher attitude toward struggle. How can we nudge students (and teachers) a bit eastward on the spectrum? What kinds of tasks can we provide for kids so they may learn persistence. 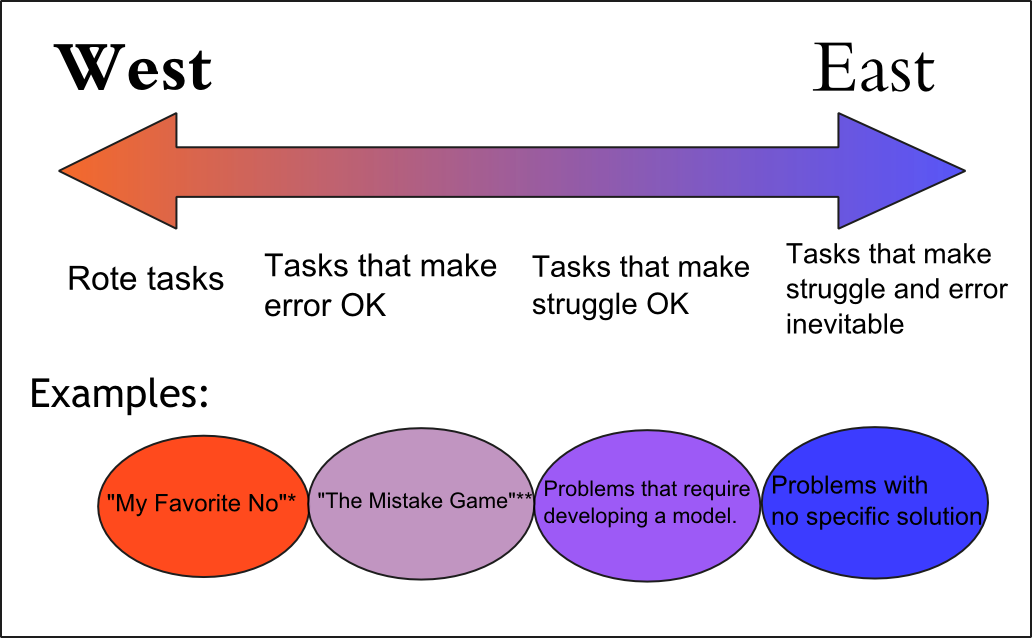 * – “My Favorite No” refers to this video from TeachingChannel.org.

** – “The Mistake Game” refers to this post from Kelly O’Shea.

While, as the article cited suggests, I hate to place a value judgment on the East-West mindsets presented. That said, I don’t think we’re particularly lacking of Western-style classrooms. Do you have particular tasks that help kids get away from a Western attitude toward struggle and smarts? Even if it nudges kids just a bit further “eastward”, please share. Because we all know that struggling and persisting are good things, but we’re not always sure on how to engage students in this manner.

13 thoughts on “The Struggle for Productive Struggle”