In between the instant they opened the door to Jo Boaler’s talk on “Promoting Equity Through Teaching for a Growth Mindset” and when she began speaking, I, Eleanor, and a few others in my row banded together as Jo Boaler groupies. We were those people at rock festivals who get to the stage several acts prior to your favorite band to ensure that we are front row, center. And to be honest, it kind of felt like that: like we were waiting for a performance for a favorite musician.

What’s Math Got To Do With It is the first book I recommend to math teachers and parents vaguely interested in math education. Its combination of research-based practices, accessibility, and price make it – in my opinion – the premier text on math instruction. And that was before the Boaler-Dweck tag-team was unleashed in full.

I’ve been thinking a lot about “death knells” recently, things that basically signal there’s virtually no going back. Remediation is a “death knell” for many students. Very few students who are labeled as needing remediation ever get caught up with their peers, fewer still ever exceed their peers. Some of that may be the remedial label itself, much of that is the methods in which these remediation classes are taught.

“These kids are so far behind, we need to do more traditional math to get them caught up!”

That is a sentence uttered by someone who doesn’t understand irony, and yet is the pervasive “methodology” (if one can call it that) for reaching students who are “behind.” The same math that got these kids behind in the first place … but more of it. More packets, more computerized instruction, more “I do/you do.”

I’ve heard enough “but these kids lack the basic skills to do complex math” to last a lifetime. First off, if you ever said “these kids” around Kelly Camak, you would probably never be heard from again. Second, the experience of doing challenging, fun, creative math is exactly what “these kids” need.

Jo Boaler shared a video of “these kids” in one of her Summer sessions. The students in the video persisted on a pattern problem for, according to her, 70 minutes. We saw about 5-7 minutes of three students working on a pattern, doing complex algebra, sharing ideas, and being 100% fully engaged in math. An individual problem packet would have not fostered that level of mathematical engagement.

More striking than the video and the numerical total was this:

.@joboaler shares the story of a kid who had gotten F’s his whole life said the best part of her course was the chance to do hard problems.

Kids that have been told they are remedial know that they’re probably getting rudimentary math. Even if you call the course something cheery like “Gateway to Algebra!”, they know. They’ve been told, possibly by their math teachers, possibly by their peers, that they don’t have what it takes to be an exceptional math student.

Here’s a quote from Ilana Horn’s phenomenal Strength in Numbers I shared in my presentation. 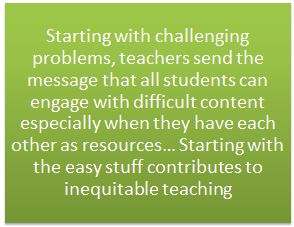 So what of “these kids”? What about the kids that fail (and presumably have or will fail) math? They’ve lost credit in math for the year and must spend their entire summer sequestered in Summer School.

Let’s try revamping the Summer School experience. Boaler shared a small clip of a summer math experience that allowed kids to experience math in a rich way, possibly for the first time (though, to be fair, some of the kids in the class hadn’t failed and were there for some other reason, I’m not quite clear). My recommendation would be not to attempt to re-cover 8th grade math in a more rote way, but rather consider this an intervention, a lifeline, for math. Throw out the packets and books and spend a few weeks combing through and giving kids the following:

Summer School is one of those “death knells” for students. Students that get sacked into Summer School often are doomed to repeat it. At that point, cramming a year’s worth of mathematical content isn’t going to bring them back from the brink. It requires an entire rebuilding. I’m so thankful Boaler has offered teachers and students so many lifelines, via a low-cost book, a no-cost MOOC, and of course, a beautifully designed website for introductory resources and videos.

Instead of saying “these kids can’t do X,Y,Z”, let’s try this instead.

Thanks to Fawn and Jo and Ilana and Kelly, and my fellow #joboliebers.