It’s both the first question and the last one when developing an inquiry-driven classroom, ostensibly featuring significant groupwork:

How do you keep individual students accountable while working in groups?

While that’s a huge bear of a question that is better addressed via a book, I want to take a stab at a small slice of it. I’m going to ask myself this question instead:

How do you assess individual students in group settings?

While also a big question better served by a myriad of strategies, interventions and norm-setting, I’d like to share a brainstorming “aha” moment that I had a couple years back with Jessica (@bloveteach).

We were discussing her thematic Problem-based unit on solving systems of equations featuring diagramming and developing football plays. (Note: you can read about the unit and the awesome task author here from the local paper.)

Jessica and I were trying to come up with a way to adhere to the norms and boons of groupwork and collaboration while developing the unit with an individualized literacy prompt. In groups, students would analyze an assigned football play (specifically the wide receiver routes). The groups would develop a linear equation to model the play. They would prepare a presentation discussing their assigned football plays and whatever additional attributes of the play they’d add on: receivers running parallel routes, crossing patterns and so forth.

Then what? As a network of schools, we’ve pretty much decided that every effective PBL/PrBL unit requires an individualized disciplinary performance task, preferably one as engaging as the tasks themselves.

After discussing and racking our brains, Jessica and I came up with the idea of audibles. That’s a footbally thing, right?

Students presented their plays as a group, but then Jessica called an audible, in which students were assigned a different, but not totally dissimilar play in which they were to write an analytical report assessed via a rubric. 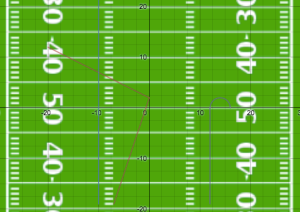 (Note: I recently went back and prettied the plays up. You see, these tasks were originally developed back when desmos was only a gleam in Eli’s eyes.

They used the same concepts from their groupwork in a similar scenario to ensure they had gotten the mathematics concepts down pat.

I had a similar conversation about this task from the Shell Centre.

This is one of my favorite tasks, so much so I threw it in my PrBL Starter Kit. I was sharing this task and then the question came up: what next? How will I know if individual students have learned anything? Again, setting things like equitable groupwork and norm-setting aside, the easiest thing a teacher could do is go back to the prompt and just do this with it.

OK, now you’ve done it in a group, let’s put your understanding to the test.

Shoot, let’s make this the test. It took five minutes to rework the diagram (badly!) with the help of inkscape (free!) and now I’ve got a similar problem for individual students to undertake. Perhaps the embodiment of “we do, you do.” Instead of Peyton Manning calling an audible, Mr. Shopkeeper blew out his east and west walls in order to expand the store. Feel free to use your notes from your groupwork.

The audible method probably isn’t earth-shattering, but it is quick, easy and implementable. And congrats! You just saved yourself the writing of a test.