What? How do YOU spend your two-hour school delays?, Water Content in a Snow Cylinder

As anyone in town for NCTM in Denver know, it’s been a bit snowy here this week. In fact, Fort Collins just had its biggest snowfall of the year. But how big?

We had a two hour school delay this morning as my daughter and I were greeted by this on our back doorstep. 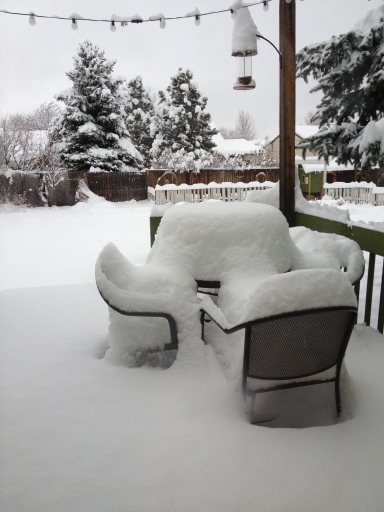 “Wow that’s a lot of snow!” she says. But how much snow is it?  Go go gadget EmergentMath!

I got this ridiculously large [cola] mug at a white elephant gift exchange last Christmas. And now I have a chance to use it!

I asked her to make a prediction on how full the mug would be after it melted. We each made a prediction using her hair ties (hers on top, mine on bottom).

We took a couple measurements just for posterity’s sake.

I dunno, we might want them later. For now though, we just stuck with the predictions.

We then watched it melt. Slowly.

Sure enough, we were both way off:

Wow. All that snow and only that much actual moisture. I have some questions:

I also have a couple comments:

My daughter and I could have gone into the volume of the near-cylinder, which dimensions were useful and that sort of thing. But our two hours were up. It was time to go to school.

Update 4/16: I’ve got my Facebook friends eating out of the palm of my hand. *maniacal laugh*

8 thoughts on “What? How do YOU spend your two-hour school delays?, Water Content in a Snow Cylinder”